And now the English shorter version:

On Thursday November 21st, we hosted ForgeRock Identity Day in Paris, a half day event for our customers, prospect customers and partners. We presented our vision of the identity landscape, our products and the roadmap. And three of our French customers : CNP Assurances, GRDF, Renault-Nissan-Mitsubishi Alliance, presented how ForgeRock has helped them with their digital transformation and identity needs. My colleagues from the Solutions Architect team ran a live demo of our web and mobile sample banking applications, to illustrate the power of the ForgeRock Identity Platform. And I closed the day with a presentation of the product roadmap and especially of ForgeRock Identity Cloud, our solution as a service. As usual, all my photos are visible in this public Flickr album. 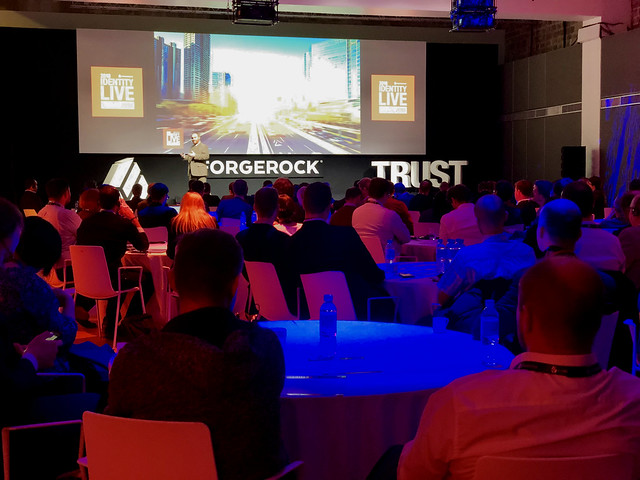 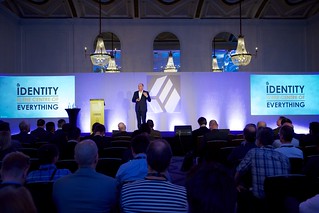 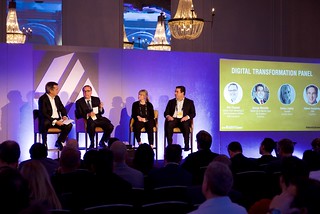 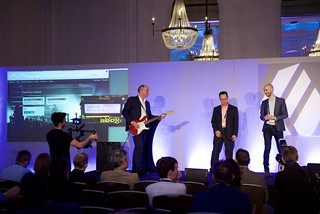 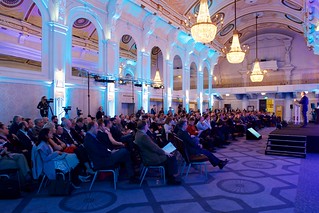 Last Monday and Tuesday (Nov 18-19), I was in Paris attending the 4th International LDAP Conference, an event I help to organize with LDAPGTF, a network of French actors in the LDAP and Identity space. ForgeRock was also one of the 3 gold sponsors of the conference along with Symas and Linagora.

The conference happens every other year and is usually organized by volunteers from the community. This year, the French guys were the most motivated, especially Clément Oudot from Linagora, leader of the LDAP Tool Box and lemonLDAP projects, and Emmanuel Lecharny one of the most active developers on Apache Directory Server.

I was honored to be the keynote and first speaker of the conference and presented “The Shift to Identity Relationship Management“, which was well received and raised a lot of interest from the audience.

The first day was focusing more on the users of LDAP and directory services technologies, and several presentations were made about REST interfaces to directory services, including the standard in progress: SCIM.

Kirian Ayyagari, from the Apache Directory project, presented his work on SCIM and the eSCIMo project. Present for the first time at LDAPCon, Microsoft’s  Philippe Beraud spoke about Windows Azure Active Directory and its Graph API. And I talked about and demoed the REST to LDAP service that we’ve built in OpenDJ. For the demo, I used PostMan, a test client for HTTP and APIs, but also our newly open sourced sample application for Android : OpenDJ contact manager. In the afternoon, Peter Gietz talked about the work he did around SPML and SCIM leveraging OpenLDAP access log.

After many talks about REST, we had a series of talk around RBAC. Shawn McKinney presented the Fortress open source IAM project and more specifically the new work being done around RBAC. Then Peter, Shawn and Markus Widmer talked about the effort to build a common LDAP schema for RBAC. And Matthew Hardin talked about the OpenLDAP RBAC overlay bringing policy decisions within the directory  when deploying Fortress.

Then followed presentations about local directory proxy services for security based on OpenLDAP, about Red Hat FreeIPA (another first appearance at LDAPCon) and about OpenLDAP configuration management with Apache Directory Studio. Also Stefan Fabel came all the way from Hawaii ( Aloha ! ) to present a directory based application for managing and reporting publications by a university: an interesting story about building directory schema and data model.

The day ended with a presentation from Clement Oudot about OpenLDAP and the password policy overlay. As usual, talking about the LDAP password policy internet-draft raises the question of when it will be finally published as an RFC. While there is a consensus that it’s important to have a standard reference document for it, I’m failing to see how we can dedicate resources to achieve that goal. Let’s see if someone will stand up and take the leadership on that project.

After such a long day of talks and discussion, most of the attendees converged to a nearby pub where we enjoyed beers and food while winding down the day through endless discussions.

The second day of LDAPCon 2013 was more focused on developers and the development of directory services. It was a mix of status and presentations of open source directory projects like OpenDJ, OpenLDAP or LSC, some discussions about backend services, performance design considerations and benchmarks, a talk about Spring LDAP… As usual, we had a little bit of a musical introduction to Howard Chu‘s presentation.

I enjoyed the Benchmark presentation by Jillian Kozyra, which was lively, rational and outlining the major difference between open source based products and closed source ones (although all closed source products were anonymized due to license restrictions). It’s worth noting that Jillian is pretty new in the directory space and she seems to have tried to be as fair as possible with her tests, but she did say that the best documented product and the easiest one to install and deploy is OpenDJ. Yeah !!! 🙂

Another interesting talk was Christian Hollstein‘s about his “Distributed Virtual Transaction Directory Server“, a telco grade project he’s working on to serve the needs of the 4G network services (such as HSS, HLR…). It’s clear to me that telco operators and network equipment providers are now all converging to LDAP technologies for the network and this drives a lot of requirements on the products (something I knew since we started the OpenDS project at Sun, kept in mind while developing OpenDJ, even though right now our focus has mainly been on the large enterprises and consumer facing directory services).

It’s been a great edition of the LDAPCon and I’m looking forward to the next one, in 2 years !

Meanwhile I’d like to thanks the sponsors, all 75 attendees, the 19th speakers and the 2 organizers I had not mentioned yet : M.C. Jonathan Clarke and Benoit Mortier.

Last week, ForgeRock hosted its first european Open Identity Summit, in the “Chateau de Béhoust” just outside Paris. For two and half days, our 110+ visitors, a mix of customers, prospect customers, partners and consultants, could attend presentations, meet and greet with ForgeRock employees, have lengthy discussions with peers, exchanging experience or use case scenarios around the ForgeRock Open Identity Stack. All of this in a very relaxed and friendly atmosphere.

All of the presentations have been filmed and will be available shortly through our web site and the summit page. If you missed the event and want to get a feel of the content, please check Simon Moffat’s review.

As usual, I’ve taken a few pictures of the event.

Thanks to all attendees and sponsors of the event. And see you next year for the second edition of our ForgeRock summits.

LDAPCon brings together vendors, developers, active LDAP practitioners, system administrators to share their experiences about service operations, interoperability, application development and discuss LDAP at large, in a friendly and passionated atmosphere. It’s a unique occasion to discuss with the developers of most LDAP related projects, seed them with new ideas, learn the under-documented tips and tricks about your favorite server or library, or exchange with other users and system administrators about the best practices around LDAP directory services and applications.

A Call for Papers have been raised. You have up to September 8th 2013 to submit your talk. You can find all details, important dates or topic ideas on the LDAPCon CFP page.

You can also track the event, the availability of tickets, the attendees, or indicate your participation on the LDAPCon page on  Lanyrd.

I hope to see you in Paris in November. 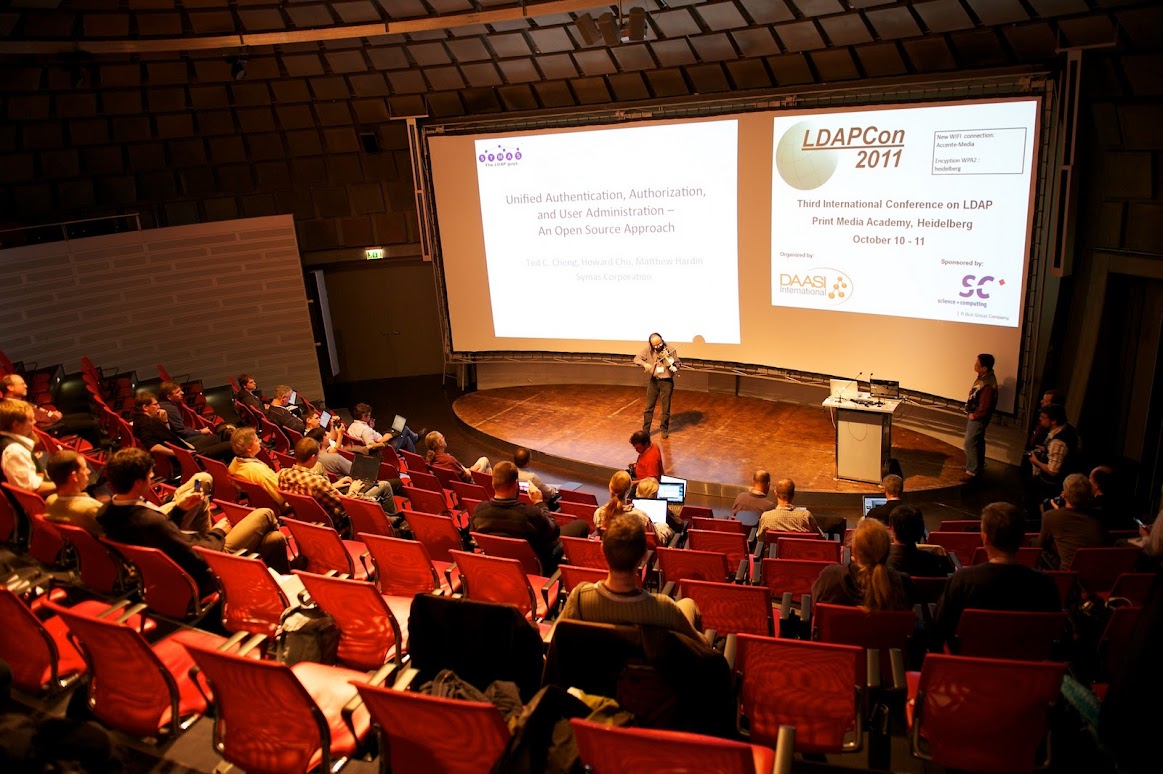 The second edition of the Devoxx France conference is starting tomorrow morning and we’re ready to welcome the 1300+ developers to our booth.

Booth at about 7pm.

Looking forward to a great conference. See you all in the next 3 days.

I was in Paris end of last week, attending the first edition of Devoxx France, a Java developers’ conference.

Devoxx is a well known and highly attended Java developers conference that takes place late fall in Antwerp. The French version has been initiated by the Paris Java User Group and has a similar structure but with 75% of the talks in French.
For a first edition, Devoxx France 2012 is a real success. Sold out 2 weeks before the event, over 1200 persons attended the 3 days’ conference. Yet, the conference felt human.

I was there only for the second and third days, as an attendee and as a co-speaker in the BOF session about Open Source Software in France.It was also the opportunity to meet and discuss with other developers, open source project leaders and potential customers.

Out of the talks that I’ve attended, I preferred the ones that were quite low level. Among them, 2 around hacking the JVM and the bytecode:

I also enjoyed 2 presentations by Alex Snaps, one around concurrency and the CompareAndSet method. The other one about SizeOf or the difficulty to compute the exact size of Java objects, in order to improve large cache efficiency and management. I shall look at the ehcache project code, to see if we can leverage some of it for OpenDJ caches.

Also worth mentioning, 2 greats keynotes on the Friday morning with Pat Chanezon and Neal Ford.

I’ve taken a few photos during Devoxx France 2012, feel free to use or share them (under Creative Commons). And if you want to see more photos of the event, you can check Arnaud Heritier’s collections : Day 1, Day 2, Day 3.

See you next year at Devoxx France 2013, and may be in Antwerp in November for Devoxx (WorldWide)

I’ve been told that there is a special one time offer on this training. If you book the training by Friday January 13th, there is a 20 % discount on the course fee, which bring down the price of the 4 days course down to 2350€.

And if you still hesitate, here’s a couple of quotes from the people involved in the review of the materials :

“Firstly, I’m pretty blown away by the quantity and quality of the material. It is extremely impressive, well done! :-)”

“Hell, this is going to be a GREAT directory server course!”

The course is mix of lecture and labs and is designed for system administrators, integrators, consultants, architects and developers that will be installing, configuring, administering and maintaining ForgeRock OpenDJ LDAP directory server. I’ve been reviewing the course materials, and I must say I’m really excited by it. The amount of information available in the materials is huge, and the hands-on exercises are very detailed and practical.

The training is definitely a must for anyone who is or will be deploying and managing OpenDJ. And as this is the first training for OpenDJ in Europe, I will be attending it as an observer, gathering feedback on both product and course, also possibly as an assistant to the trainer Bill Nelson.

The session will be hosted in Astec training facilities, right in the heart of Paris, close to Gare Saint Lazare and Boulevard Haussmann.

There are still some slots available, so enroll quickly by email to training@forgerock.com.