One of the things that I appreciate with Mac OS X is that it’s based on Unix, the family of operating systems I’ve been using since my years at university.

And what’s more natural to integrate a  Unix system with other Unix systems ? Well, one point of integration for identities and services is an LDAP directory server, like OpenDJ, the Open source LDAPv3 Directory service in Java.

Phillip Steinbachs has been working on a pet project of his: providing Mac OS X desktop environment via SunRay thin-clients. For this, he needed to have his Apple Xserver boxes, running Snow Leopart Server, to be integrated within the current LDAP and NFS environment, based on OpenDS (from which OpenDJ derives). Having successfully done it, Phillip just posted a summary of the changes needed to have its integrated, including the proper schema files. A good reference post for whoever wants to integrate its Mac OS based machines with LDAP!

I’ve just spent a wonderful week in Porto Alegre, Brazil where I’ve landed to talk about OpenDS at the FISL 10 conference.

This is my first visit in Brazil and I must say that I didn’t get any good impression of the country in the first two days. As a matter of fact, I didn’t get any impression at all. I arrived on Monday evening around 9pm, it was all dark. After more than 16 hours of traveling, I just wanted to hit a bed.

On the Tuesday morning, thanks to the jet lag, I got up quite early, checked email and went for breakfast by 7am, noticing a rainy day and still pretty dark. I was just done with the breakfast when Bruno Souza arrived and took me to the location of the Javali meeting, an ancillary event of FISL, sponsored by Sun and organized by SOU Java and RS JUG.

We spent the whole day in the conference room, watching from time to time through the windows the heavy rain and wind. The Javali talks ended with pizzas and guarana and by then the night was already dark.

While I didn’t get to see how Porto Alegre looks like in the first days of my visit, I did enjoyed the friendliness of Brazilians. At Javali, trying to follow the presentations in Portuguese was though but I think I got probably 50% of the technical parts thanks to the mix of english words and to my understanding of Spanish. And when it was necessary, Bruno or Mauricio Leal would do some translation for us.

I didn’t get to talk at Javali, the agenda was pretty full and I hadn’t told Bruno I would be coming as I wasn’t sure I could make it. But Pat Patterson presented Securing RESTful Web Services with OpenSSO (and OAuth) and mentioned a few times OpenDS.

Wednesday was the first day of FISL and all the Sun participants went quite early to help setting up the booth in the Exhibition Hall. Sun’s booth was very well located and its main attraction was the thousands of small soccer balls that were given to attendees that registered to the OSUM program. I think that throughout the whole event, the Sun’s booth was the most vibrant and busy one, with Roger Brinkley making demos with his toys, Angel Camacho, Brian Leonard, Kirthankar Das and others helping with installs of OpenSolaris on attendees’ laptops. 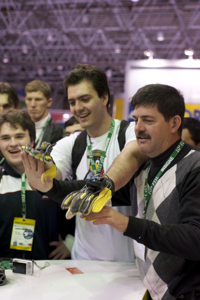 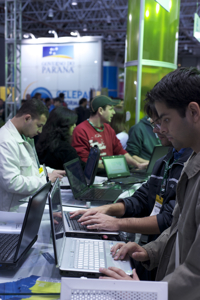 Arun Gupta fired the event on Wednesday morning with his presentation demonstrating the combined power of GlassFish, MySQL and NetBeans to build web applications.

Friday was the busiest day for me as I was scheduled for 2 presentations. But before that, I was invited to participate in Simon Phipps talk show, describing in 5 minutes, what was OpenDS, what were the benefits for the Brazilian open source users and developers.

Immediately after, and in the same room, I did my presentation for OpenDS with the theme of "Scaling the Identity Store with OpenDS". The sessions talked about the 3 models we have in OpenDS for deployment :

While FISL is mostly attended by students, my session had a majority of System Administrators, interested by simplifying and reducing the cost of their data-centers.

Later in the afternoon, I was presenting again, repeating JavaOne’s presentation from Tony Printezis and Charlie Hunt GC Tuning In the HotSpot Java Virtual Machine. Charlie was meant to attend the event, but the week before found out he could not make it. As they recalled I was in the room at JavaOne and I’m quite familiar with the subject as we’re spending a lot of time trying the different options to tune the JVM to get the best performances out of OpenDS, they asked me to cover the talk. I think I’ve done a reasonable job, despite the density of information in the slides, and the simultaneous translation in Portuguese for the largest part of the crowd not so familiar with English.

Still on Friday, part of the exhibition floor was closed to the public as the Brazilian President, Lula Da Silva, was schedule to visit the event. Sun booth was very well positioned, on the border on the closed area and the crowd started to gather by the booth as President Lula arrived. The excitement was amazing. When the President reached by the OpenSolaris Brazil user group, he received an OpenSolaris cap and T-shirt from Vitorio Sassi, Sun employee and one of the leaders of the Brazilian OpenSolaris community.

On Saturday and last day of the FISL conference, I got to share a little bit more of the stage by answering a performance related question from the attendance on Bruno Souza’s session about the future of Java,with the exceptional presence of Javali, the mascote for the Javali user group.

Overall FISL has been an amazing experience. It is definitely the biggest open source I’ve participated to. Over 8200 registered visitors, from 27 different countries, more than 320 speakers for 354 presentations and a presidential visit. More than that, Brazilians are extremely nice, generous and happy to live. They made our stay in Porto Alegre something that I’ll remember for a long time. A special thanks to the main organizers: Bruno Souza and Eduardo Lima (here below with Simon Phipps)

I’ll definitely participate to the Call For Presentation next year, if evangelism of the OpenDS project is still one of my tasks for next year.

You can find all photos for the event in the FISL 10 picasa album.

Two weeks ago, Nick Wooler and I talked about LDAP Naming Services and OpenDS in a new episode of the famous Identity Management Buzz Podcast. We cover the basics of Naming services, why LDAP naming services are the way to go and how OpenDS fits in this picture, for Solaris, OpenSolaris but also the other operating systems.

For more information, you can check the Identity Management Starter Kits for using OpenDS as the OpenSolaris Naming Service.